The Netherlands’ own Robert Kalkman Foundation has received the 2015 President’s Award for Golf Development from the PGAs of Europe at the Association’s Gala Awards ceremony at Gloria Hotels & Resorts in Turkey.

The Robert Kalkman Foundation supports children with cancer and/or a physical limitation and encourages them to find a new passion in life by playing golf.  Through a series of clinics run across the country each year, both outdoors at golf courses and indoors on simulators, the children are given unforgettable golfing experiences by a team of PGA Professionals and volunteers.

The Foundation was formed by PGA of Holland Professional, Robert Kalkman, himself a cancer survivor, who used golf as part of his rehabilitation giving him a new sporting challenge after his illness left him unable to continue his first passion as a Dutch international footballer.  Kalkman collected the award from PGAs of Europe Honorary President, Pierre Bechmann, on behalf of his Foundation at the Association’s Annual Gala Awards Dinner at Gloria Hotels & Resorts.

After a Q&A with PGA of Holland Chief Executive and friend, Frank Kirsten, along with a video showing the Foundation in action, it was clear to see what an inspiration Kalkman is as an individual and how his Foundation has enhanced so many people’s lives; and he subsequently received a standing ovation from the dinner’s guests.

“Well I must say it’s a great feeling and nice to receive the award but my special thanks go out to my team – the volunteers, the PGA Professionals, the people from the committee, and the sponsors who have made this a success now and hopefully in the same way in the future.

“I also want to thank the PGAs of Europe and the Ryder Cup European Development Trust for supporting us in the beginning – we started in 2009 and the backup we had in support from the Trust was very important in getting to where we are and continuing.”

Each of the Foundation’s clinics has the goal of giving the children a totally unforgettable day with children transported to and from hospital in order to attend where necessary.  A typical day includes learning about putting, chipping, bunker shots and practice on the driving range, with the chance to play a few holes on the course. Feedback from those who take part is very positive, which in turn helps the children to stay positive despite their illnesses.

But Kalkman doesn’t plan to stop the momentum he is gaining:

“The next step will be to continue the clinics that we do now, keeping the quality and continuity, and from there on the next step will be the ‘golf bungalow’ for the children and their parents where with 12 persons they can stay there for three or four days.  We will have our own tournaments with the children a few times a year and give clinics…they can walk along the beach and breathe the air, do what they want, and have fun.”

For more information on the Robert Kalkman Foundation visit www.robertkalkmanfoundation.com.

For More Information On All of 2015’s Award Winners Visit http://eur.pe/2015AnnualCongress

The 2015 Annual Congress and Gala Awards Dinner are supported by Rolex and the Ryder Cup European Development Trust and hosted by Gloria Hotels & Resorts – for more information on the event partners visit http://eur.pe/2015AnnualCongress. 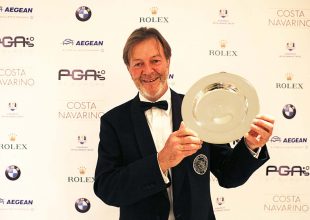